In 1953 Picasso, at the age of 73, was going through a difficult time in his life when his attention was diverted by a strikingly beautiful, but painfully shy girl, Sylvette. His relationship with his wife Françoise Gilot, with whom he had two children, was coming to an end, causing him great sadness. Throwing himself into his work he developed a series of works on this young enigma, sensing in her something fragile and untouchable. A man with a reputation for mysogyny and selfishness, Picasso displayed none of these characteristics with the young Sylvette and her boyfriend. He cared for her like a father and employed Toby her boyfriend to help them financially, enabling the English boy to get a work permit in France. Toby was a talented welder and metal worker and played a part in the Sylvette sculptures cutting out and welding the folded metal sculptures. The Sylvette series of paintings and sculptures is a rare insight into Picasso’s working mind, seeing his progression of thought over a three month period, through charcoals, pencil drawings, and oils, little studies on paper to actual sculptures in metal and bronze, and even in paper.

At the end of their collaboration, Picasso thanked Sylvette for being there at a difficult time, and she thanked him for his gaze which strengthened her belief in herself and inspired her to create, and she gave him a small statue she had made, which is still in his effects today. 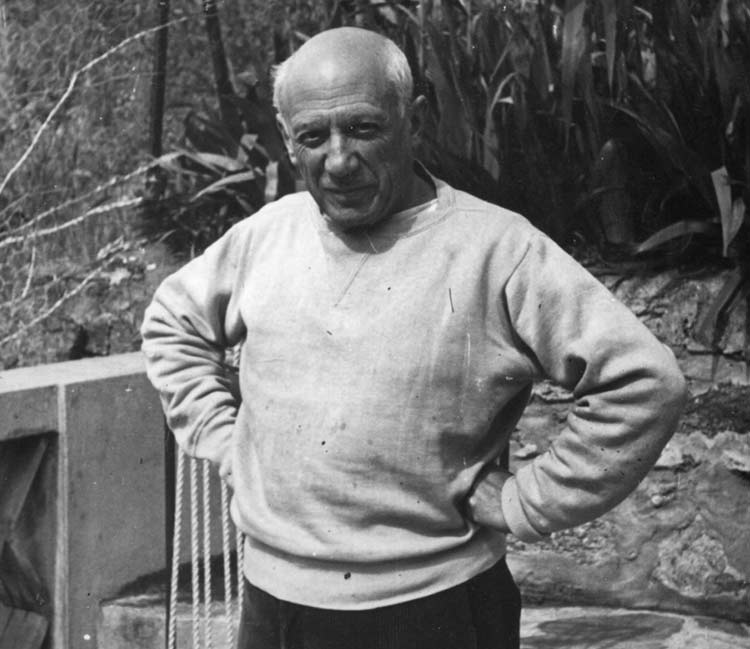 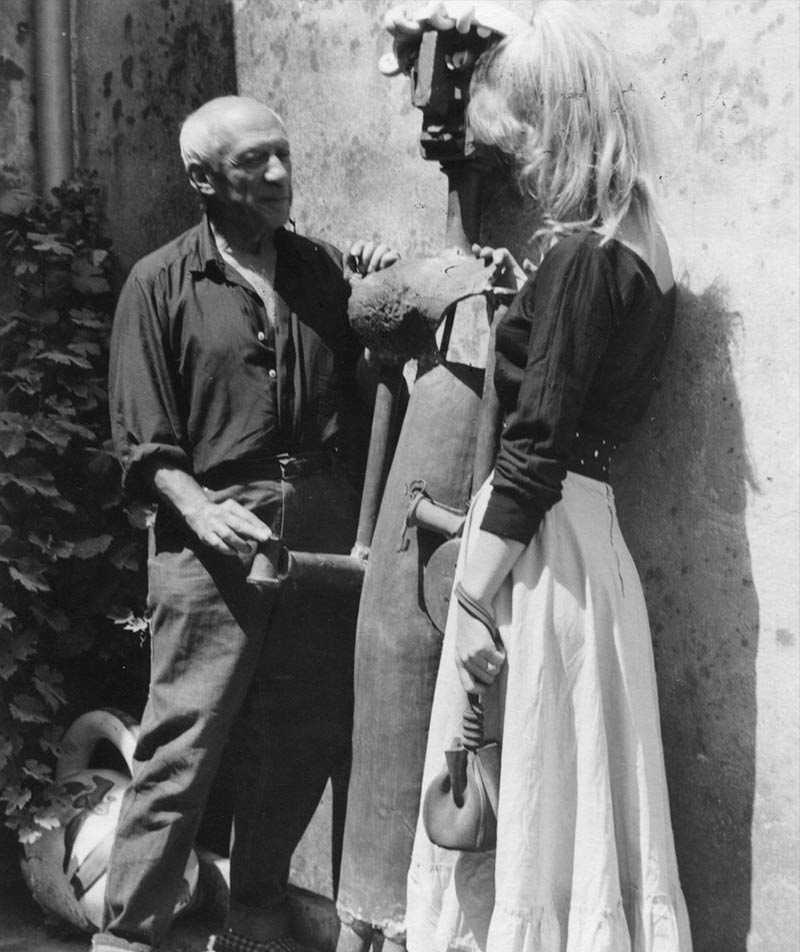 The Moment I met Picasso

Before I actually met Picasso, I had of course heard about him, but not as you may imagine — as a world famous great painter.  No, I was ignorant and in a perpetual dream.

I knew him as a local painter who was loved by everyone in the town. He was well respected, loved to go about town saying hello to people and going to bull fights where the crowd was as excited to see him as they were to see the fighting bulls. He was always smiling and laughing.

He would sometimes ride in his car with his son Paulo driving him and wave to passers by, so to me he was like a big fish in a small pond. He would walk to his hairdressers on the main street, and enjoy a coffee in the café. He seemed quite normal.

I didn’t know much about his work, because we lived very simply. I had never studied, and I was simple minded. We had no books at home, no television of course, nothing that came to us from the outside world really apart from newspapers maybe. I recall ‘Nice Matin’ talking about the film he was making. It was in Antibes, and was about him painting on glass. I watched that film.

I was aware of his ceramics, because Maman worked in a pottery, and I saw his pots in the Madoura pottery and gallery where Toby my boyfriend exhibited his chairs. Also, there was the sculpture of L’homme au Mouton in the square in Vallauris, and I knew that well, we lived just around the corner for a while and also Maman had a little shop just off that square, so it was part of my daily life.

When we took Toby’s chair to his house, this was the first time we met. He opened the door smiling and ushered us in. We set down the chair and he was very pleased with it. He loved the way it had so many different materials in it. The little felt cushion and the metal frame with rope back and seat. It was the same the second time we took the other chair, which he liked even more, with the wooden balls for hand rests, and a more upright position. He painted it many times.

Well, he paid us straight away and then we went out through the kitchen onto a terrace where we sat and drank orange juice and met the children who were full of fun. He happily posed for a photo which Toby took and even went inside to fetch his hot Russian hat coat and scarf. It wasn’t that cold, but he liked to dress up. Picasso was friendly and warm from the beginning like the sun. He radiated light and love and fun. He was very sensitive and wouldn’t hurt a fly.

My mother was so free, I was never told off. I didn’t know what manners were, I didn’t know about being rude. I was spontaneous and honest to my feelings. If I had been intimidated, if he had frightened me one bit I would have been off like a startled deer.

On the contrary, I felt safe. Of course I knew he was a man, and I knew he liked my looks. He sort of tried it on in a jokey fashion, but I never took it seriously and anyway, he was not very tall, I was taller and I saw him from above. Maybe had I been a different girl and more mature it would have been different, but I had Toby and I was faithful to him. 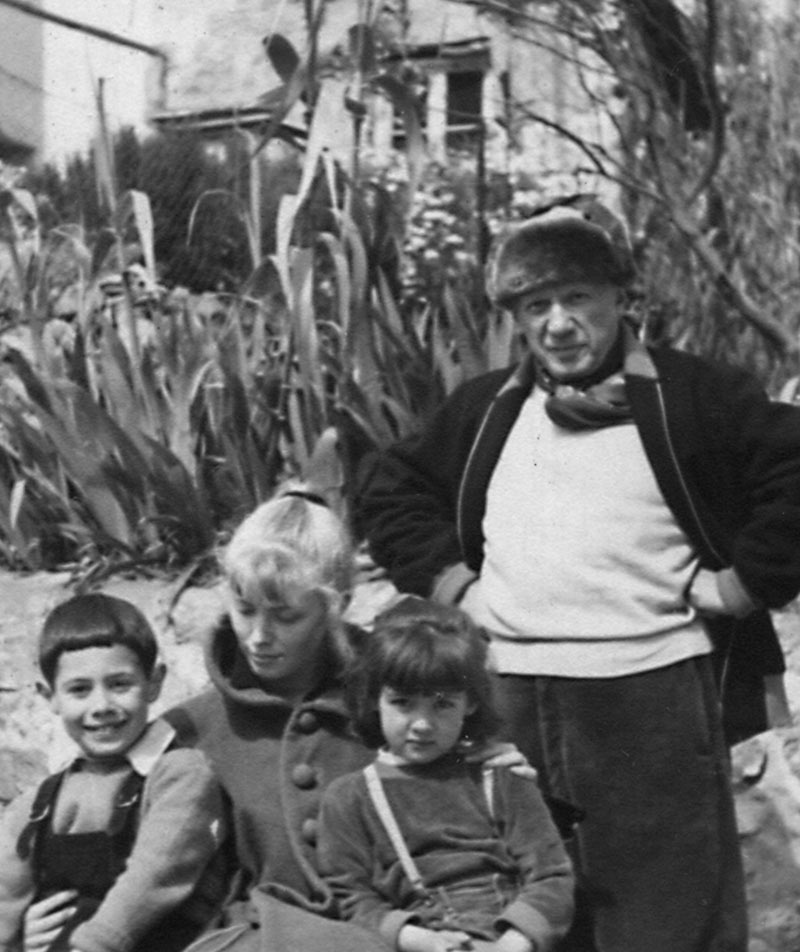 Picasso, never really talked long about anything when I saw him. He didn’t really do small talk. I just dreamed along, and didn’t think big thoughts. The only time he opened up to me was in the car, his Hispano Suiza. From my age now I can see things from my memories about that time. I am an artist, and so I understand the artist’s contemplation. We would sit together in silence while he painted and this is where the artist goes — to an inner space, the visionary side of life. Through contemplation one goes into another world, closer to God without knowing it, closer to your own soul. I believe he lived for his work. Life is a learning process, and already at 73 years old, you contemplate death. Not in a sad way, just feeling it, weighing it quietly against youth, so to slowly adjust, to its inevitable onset. Artists, musicians, writers; all creative people are so lucky because they have this wonderful ability to contemplate.