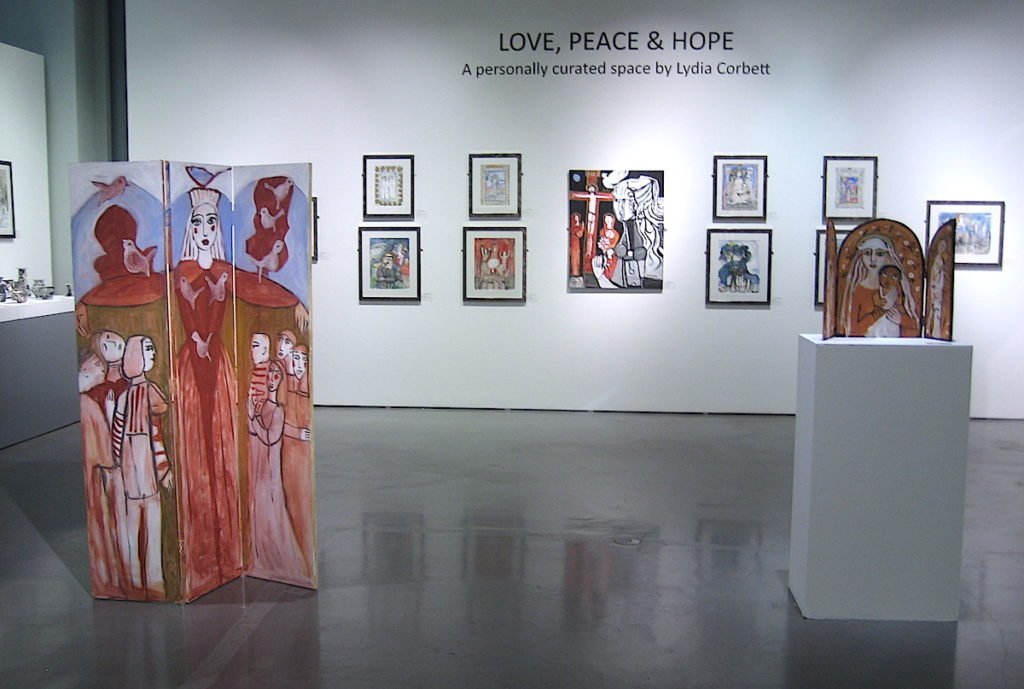 Lydia Corbett’s big show at the Mall Galleries – it fills the whole of their large available space – arrives at a particularly crucial moment in the story of Post Modern art.

In the first place we have the continuing debate about Appropriation – now, in art-speak, always spelled with a capital A. This has been going on since the 1980s and implies not merely copying in all its various forms – artists have always done that – but a wholesale takeover, on the part of one artistic creator, of the work of some predecessor. Appropriation, in a contemporary context, often amounts to a claim that making images that are in every respect and without any concealment unoriginal amounts to a new and radical form of artistic originality.

Linked to this, there has been the rise of women’s art. A female artist Appropriating the work of some male predecessor makes a claim on half of her sex. The claim is: “Once you know this is the work of a woman, you have to look at it differently – it acquires a whole series of new meanings.”

Lydia Corbett’s work complicates the debate in a new way. She is better known to art history under the name Sylvette David. Who was Sylvette? The answer is that she, for a brief, intense period, from 1953 to 1954, was the young model who obsessed the ageing Picasso. Unlike his other muses, there was no sexual relationship. Good reason, maybe, why she survived the Minotaur of the Modern Movement so successfully.

You see Sylvette’s image, in pretty much exactly the form in which Picasso created it, in many of these works in this show.

In this case, however, it seems reasonable to speak of Re-Appropriation rather than of simple Appropriation. As Picasso’s likenesses of her make clear, the Sylvette-now-Lydia who obsessed the ageing master for this brief period in the immediately post-war years represented a new generation of free-spirited young women, innocently living life to the full. Sylvette was the archetype of the girls of that time. Which, of course, is why she fascinated the ageing artist. It’s not too much to say that, while he appropriated her, in the years that followed she successfully stole herself back. Which of them was truly responsible for creative theft? Given the circumstances, it is difficult to say.

This big show doesn’t confine itself to self-portraits. It holds up a mirror to what has been a rich and complicated bohemian life – husbands, lovers, children, grandchildren. Making art, rather than just inspiring it, came gradually. Now a lot of her images are religious, which I suspect Picasso might have found strange.

Whatever their source, they often have great charm. I enjoyed looking at them, and, yes, I enjoyed meeting her. She’s still a muse in old age.